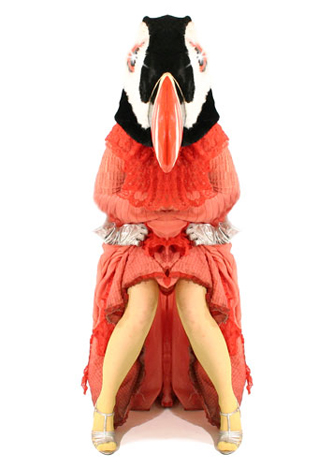 The Artist as a Puffin

The cult of the cute puffin gremlin. / mixed media installation, performances and design, 2006 The figure of the Icelandic artist did in the beginning of the century achieve an original status through an identification process that has been granted by the international music press. This has involved the creation of a mythology that revolves around a cute-like identity that affects the psyche of the individual artist to the extent that he has come to look upon the myth as being his own creation. At this point one can talk about the mystifying cult of the cute, weird, elf-like and nature oriented phenomena of the Icelandic artist. The reality of this cute (krutt) image comes with a proviso, especially within Reykjavik’s promiscuous bar scene: like Gremlins, the cute often becomes monstrous after midnight. This Gremlin is both exotic and erotically charged, and its not afraid to play with it. Icelandic art Gremlins, in particular, are a real curiosity. Here it is interesting to note how the image of the puffin – the Icelandic bird - has been changed to cater to the tourist industry. The most recent images being a direct visual reference to Minnie Mouse. The puffin as a special brand instead of blood thirsty carnivore has become the icon of cuteness with big, round, endearing eyes and a soft cuddly body. A parallel can under these circumstances be drawn between the mechanism of cuteness and that of horniness. The postures and intonations of the classical porn scene utilizes the same mechanisms as does an extremely cute puffin in that it invokes an involuntary response of a sympathetic nature. The puffin, like Minnie Mouse before her, has become a curious hybrid of desire production. Gizmo turned into a Gremlin, which is the reverse process of the puffin turned Minnie Mouse, and the artist changed by the Cult of the Cute are all examples of opportunities of ironic intervention – a tool that our generation has to fight the melancholic boredom that accompanies the seemingly latté-ridden meaninglessness of modern life. It’s a game of reappropriation, of taking control over the creation of meaning of the symbols representing one’s own identity.